Tired, cold, sick and deflated. After being comprehensively defeated by the cold on the previous two days I was staring defeat in the face for the first time in my travels in China. After a second night of virtually no sleep in my boiling hot, windowless hotel room the thought of going out and facing the piercing, bitter, -28C conditions outside again was only marginally more appealing than suffocating in a room full of someone else’s farts.

However, today was the day I was taking on the main attraction and the reason I’d come here; Harbin International Ice and Snow Sculpture Festival. After the last two days ending early and subsequently being spoilt by my inability to remain outside for more than 10 mins, today I was taking no chances. I layered up with practically every item of clothing I’d taken with me:

I looked ridiculous! (think ‘Michelin man going on a skiing holiday’) I was sweating before I’d even left the hotel but once I was outside it was apparent I’d finally found a level which allow me to stay outside for something approaching a reasonable level of time (although my movement wasn’t exactly ‘fluid’) Having been quoted exorbitant taxi rates to get to Sun Island I decided to walk along Zhongyang Street up to the river and take the cable-car across again. I slipped a couple of times on the ice which had now formed on the roads after traffic had compacted the snow which had come bucketing down on my first night there, and while my ‘exposed areas’ (literally now just the area around my eyes at this point) were still stung by the cold, I was coping with, although not enjoying, the experience. 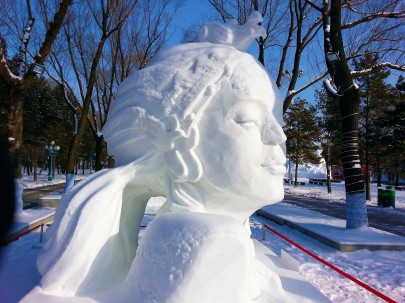 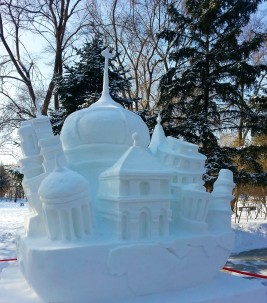 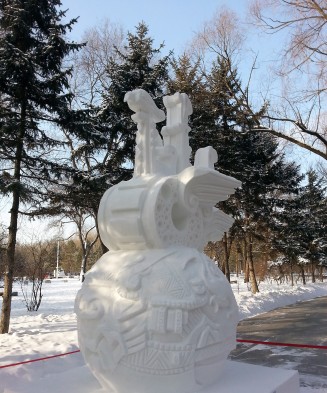 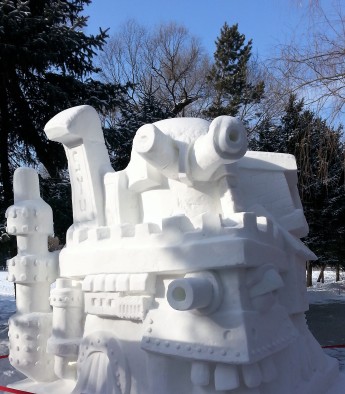 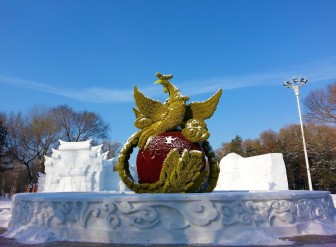 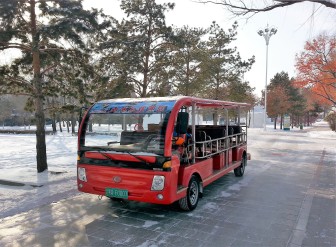 The festival is made up of two main areas; Sun Island, which features over 100 roughly 8-10 foot high exhibits making up the international sculpture competition as well as a number of truly huge snow sculptures, and ice and snow world featuring the gargantuan ice city which takes place in the west of Sun island park by the imaginatively titled Ice-Snow world metro station. My mood perked up when I got to the entrance to Sun Island; the place was deserted! Save for a few locals cycling around, the odd tour group and the inevitable little electric buses which ferry the lazy about whizzing past ever 10 minutes I had the place to myself, although the 280RMB (€35, £31) entry fee may have had something to do with this!

Through the single-file entrance gate (which I later found out was due to me coming in through the back, rather than the main entrance) I was greeted by a short road with the ‘standard’ size 8-10 feet snow sculptures on either side (2.5-3 meters for those of you on metric) I’d missed the main competition by a week or so (this was deliberate as research had told me that the hotel prices & crowds during competition week are insane) so a couple of the sculptures were a little dulled at the edges but this didn’t detract from their overall impressiveness. My last and probably only snow ‘sculpture’ was a pretty miserable looking snowman made is a pub garden in Milton Keynes 5 years ago so I couldn’t exactly criticise! The snow from the previous day had abated and the sun was out (although the temp was still -25C) I took a slow stroll through the park taking in the smaller sculptures and getting some pictures (the new gloves I’d bought to go over my first pair had some swanky new tech where your phone will respond despite wearing gloves) which helped with taking pictures. 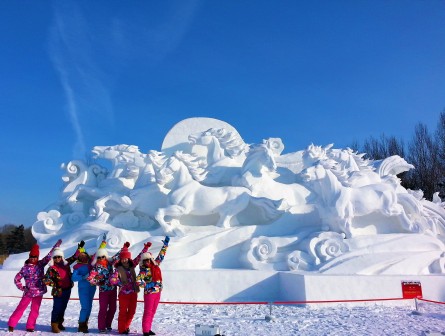 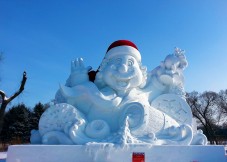 Senor Jolly having a blast by the looks of things 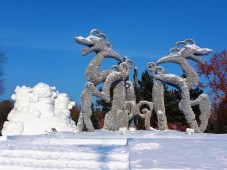 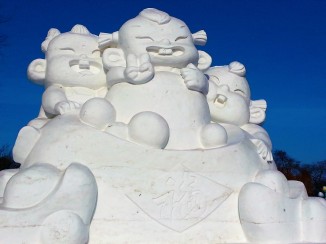 Set of giant snow babies throwing out the ‘v’s 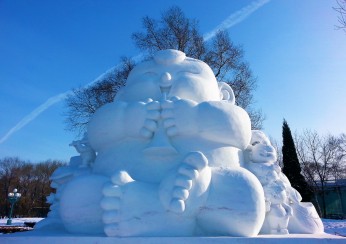 The park has a few different winding paths, each well covered with sculptures and I spent a pleasant hour taking them in and getting some pics before I  started approaching the main area. The sculptures get progressively larger and more intricate as you approach the centre, and I particularly enjoyed ‘Señor Jolly’, an unusual, giant snow composite of all things Christmas excess loosely based on a cross between Santa Clause and a Chinese businessman. Coupled with the giant babies throwing out the obligatory two-finger ‘peace’ sign which it seems impossible for anyone in China under 30 to be photographed without making, they displayed a level of humour which I’ve not experienced regularly in China.

Almost inevitably at this stage, despite the layering, the cold started to take it’s toll. Being in a park full of snow surrounded by frozen lakes I wasn’t counting on any rest-bite, so I was delighted when I rounded the corner to find a fully-fledged, walled & heated cafe selling hot drinks and food. I was happy enough to have found it, but that turned to delight when I walked in and found that the entire back wall was made of glass and overlooked the epic centrepiece of this years festival. A towering wall of snow with an ‘ode to the Olympics’ theme, easily 100m long and an imposing 20m high. The showpiece of the wall was a giant, topless angel; arms outstretched, wings unfurled, hair windswept in the breeze and massive snow-boobies on display for the whole world to see! 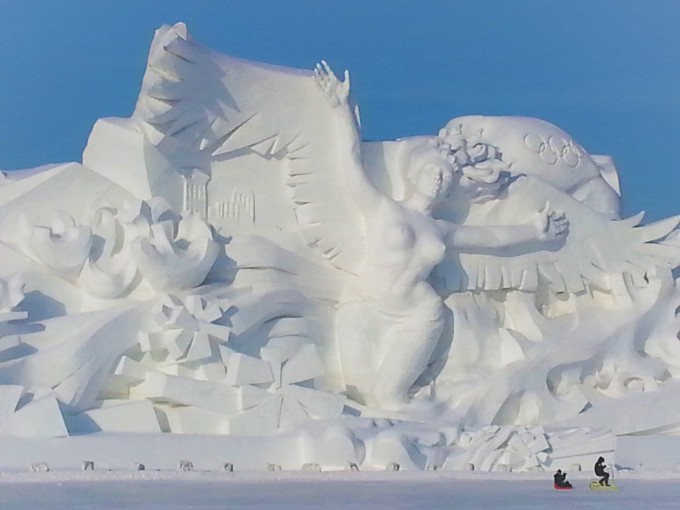 I grabbed one of the many free tables and sat working my way through hot milk teas, people watching and taking in the view while I got the feeling back in my extremities. There was much more activity in the central area of the park, and the section in front of the ‘snowpiece’ was a large frozen lake which had been converted, like the Songhua river, into an ice playground. The main attraction where what I’ll call ‘icycles’, converted bikes you could ride in the ice, often pulling sledges containing children or younger siblings. After warming up and re-layering I headed back out, and on investigation I found there was also a huge snow slide built into the back of the sculpture and you could ride down atop a large rubber ring but I declined on the grounds a) I was still way to bloody cold and b) time was getting on and I wanted to reach ice and snow world before sunset. I headed back towards the bridge which I’d found on my wanderings earlier which led to the large & busy main gate and after about 10 mins of confusion and  communication issues boarded the unmarked shuttle-bus which would take me (kind-of) to Snow & Ice world (snow & ice world very much merits it’s own post and I’m aware I’ve gone on a bit already so I’ll cover that next week!) 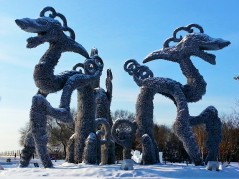 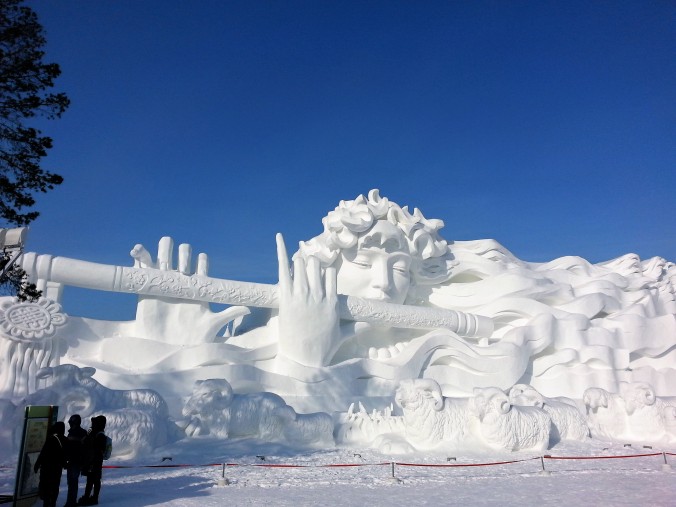