The skyline of one of the world’s great mega-cities spread out before me and away into the distance. The views from Victoria Peak were staggering, and despite the heavy tourist traffic on the tram coming up, the trail around the peak was virtually deserted which suited me just fine. After a few hours ambling around, getting pictures of the skyline and generally just drinking it all in, I was ready to head back to ground level and get to my next stop; the Man Mo temple complex on Hollywood road. 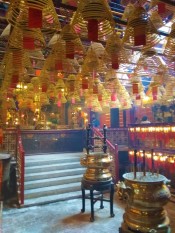 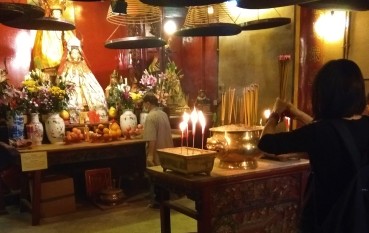 While not one of the most impressive temples in Asia, Man Mo is certainly one of the most atmospheric. Tucked away in the central Shung Wan district and build on only the second road constructed in Hong Kong when it was first colonised (Hollywood rd) Man Mo is dedicated to the Gods of literature (Man) & war (Mo) both of whom are honored by students looking to succeed in exams. The dark, smokey, incense-saturated air of the interior is home to a constant flow of foot traffic with devotees coming to pay their respects and make offerings, serving as a wonderful insight into Hong Kong’s spiritual side but also as a somewhat difficult environment to take any good pictures with my crappy camera phone! 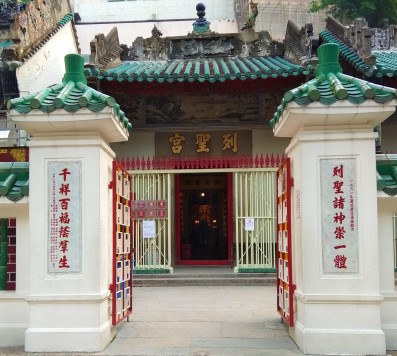 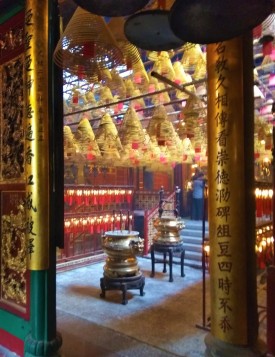 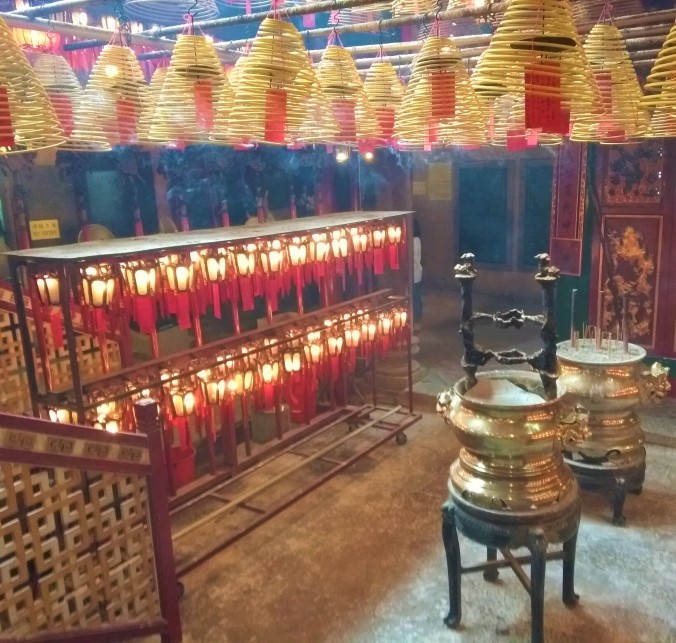 After inhaling enough incense smoke to fill a small fog machine I fancied some ‘outside’ time (despite the humidity) and so settled on a walk along the riverside. Unsurprisingly for a city of over 7 million people, this isn’t the quiet riverside stroll you’d typically envision! By chance I ended passing the ferry terminal and I remembered something I’d read about the ‘Star ferry’. Connecting Hong Kong island with Kowloon peninsula, the Star ferries run every ten minutes or so and give a fantastic view of the city skyline for a very reasonable $2.70HKD (about 25pence) In a city where you can pay £10 (£100HKD) for a glass of coke, this is an absolute bargain and so I hopped onto the first available ferry and settled in. The journey isn’t long (you spend about 7-8 minutes on the water) but there’s plenty of time to get some shots of the skyline and passing boats and ferries. There are other, dedicated, tourist services you can use which will take you out for much longer but, again, you’ll be paying top dollar should you go that route. 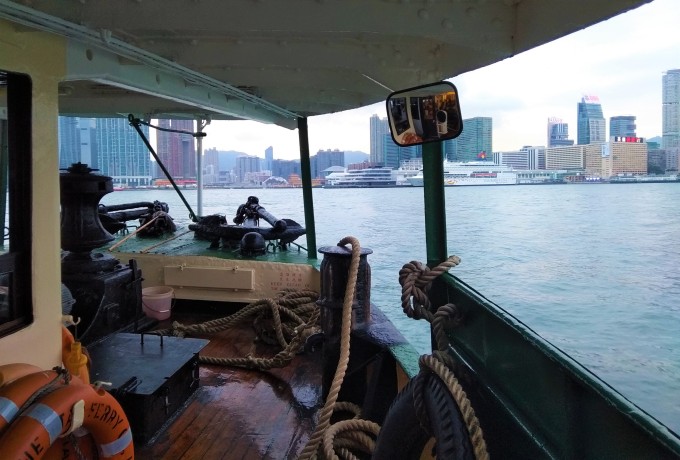 I alighted in Kowloon. While still surrounded with that same chaotic energy, the backdrop had changed. The cramped, ramshackle buildings of central are replaced with still cramped but monstrous glass and chrome store frontages which have become the calling card of most major modern cities. Still, this is Hong Kong, so even the entrances to the towering homages to the giants of capitalism are crammed between street food sellers and vendors selling anything from handmade jewelry, fake handbags, random animals through to scratchcards. 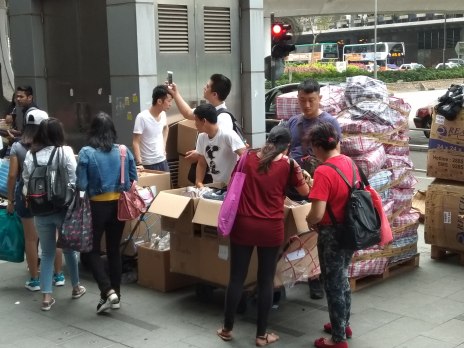 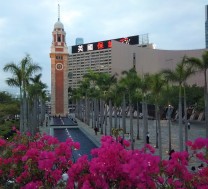 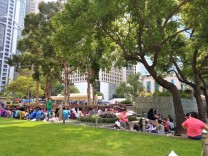 I wandered around for a while taking in the streets, window shopping and constantly gasping at the prices of brands I’d never buy in my life (even if I could afford to pay £50,000 for a watch) and then made my way back to the waterfront. It wasn’t a coincidence I’d ended up near the river, I’d been aiming to wind up there as the evening set in as this was the location for my last sightseeing opportunity of the day : the symphony of lights. 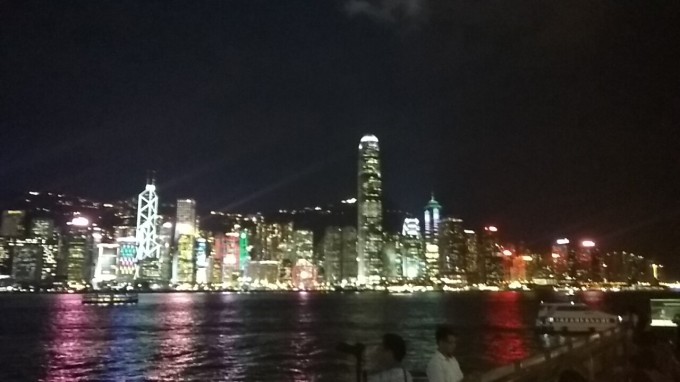 A triumph of ingenuity and programming, the symphony of lights is a daily 8pm light / multimedia show, set to music, involving the billboards and light rigs on a considerable number of the buildings on both sides of Hong Kong waterfront. I walked along the avenue of stars and on to the raised platform on Tsim Sha Tsui promenade. Despite it being nearly an hour until the show started, most of the decent spots (and all of the benches) were already taken so I grabbed a perch on the banister towards the left hand side of the crowd and settled in. 50 minutes later and the LCDs on the buildings signaled the countdown, and the music struck up. Queue 10 minutes or so of block graphic animations on the LCDs screens and spotlights from multiple buildings turning the night sky back to day. I’m not sure what I was expecting and although I enjoyed it (particularly the score from the Hong Kong orchestra) I was a little disappointed with the overall effect, I thought more of the skyline would be involved. That said, there were some excellent photo opportunities if you have a camera that can deal with low light. I don’t.

I jumped back onto the MRT and made the 40 minute journey back to the hotel with a combination of satisfaction and exhaustion (Satishaustion? Exhaustisfaction?) whatever you want to call it, I was delighted with my introduction to Hong Kong. Unfortunately I couldn’t spend as long there as I’d have liked, Taiwan was calling and my flight to Taipei was booked for the following day but I’m sure of one thing; I didn’t even scratch the surface of what this wonderful, insanely energetic and enigmatic city has to offer. God willing, one day I’ll be back to find out! 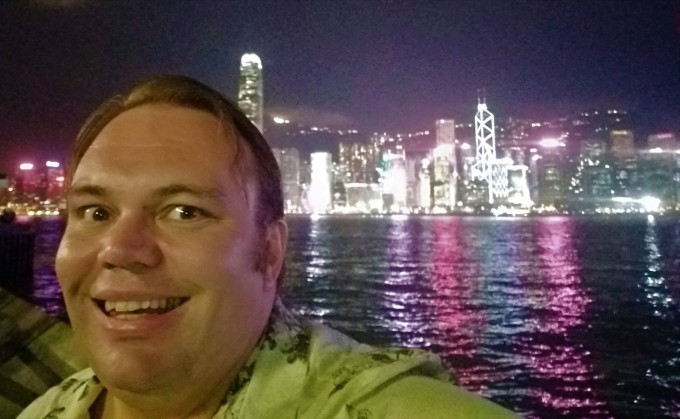