PAYDAY!! It’s 11 months now since I handed in my notice at and walked away from my old job to start off on my ‘adventures’ and so when my first payday in nearly a year came around last week, a celebration of some description was obviously in order! That celebration took the form of a two-day shopping (and eating) spree in Wenzhou, the nearest ‘big’ city (by Chinese standards) to the relative mere million-man backwater that is my current home in Rui’an.

I’ve never enjoyed clothes shopping even back in the UK or Ireland as sizing has always been an issue for me. Historically I’d always be heading home not just empty-handed but depressed that I needed a crowbar and two assistants to get into the largest shirt I could find in any shop so I wasn’t exactly keen to go looking in China, home of what feels like a collection of the worlds skinniest people. However I was lured with the promise of a supermarket choc full of imported goodness that you can’t get in Rui’an and so jumped on the bus to take the 1 hour ride into Wenzhou (you can take a 20 minute train journey but it takes 30 mins to get to the train station so it’s much of a muchness) Which is a shame, cause the Rui’an to Wenzhou bus is awful. I’m not sure why. Every other bus in Rui’an in clear, tidy, air-conditioned and well equipped with nice comfy seats. This route, however, is made up of the sort of busses you’d imagine finding in some piss-ant backwater in the arse-end of nowhere. The seats randomly fall backwards, are holed and (worryingly) stained, the ‘curtains’ even more so to the point you kinda don’t want to touch them and the suspension on these things is f*8ked! Every bump will fire you a good 1-2 feet in the air then back into your holey seat with a thud which I’d imagine would put the fear into you if your of a certain age (maybe that’s where the stains came from)

After the less than enjoyable bus ride we arrived and jumped into what would prove to be the first of a frankly ridiculous amount of taxi rides in the course of the next 2 days. The thing about Wenzhou is that it’s all very spread out (with a population of around 15 million people) but with a mass transit system inferior even to Wolverhampton! At least that has a tram system as well as the busses. Wenzhou just has more busses and a ‘special’ bus with it’s own lane called the BRT (or Bert as I decided to mumble under my breath every time we passed the sign) That only goes down one long road. Useless Bert.

Our two day itinerary planned to take in 3 locations recommended by other longer-serving teachers and an ex-pat Facebook group; the Mixc mall (home of ‘Ole’ import supermarket and a host of premium Western brands) the outlet mall with a raft of brands at hugely reduced prices (although we were assured it’s all legit) and the huge clothing market next to the old railway station.

Our first stop was the Mixc mall, through luck rather than judgement as the bus happened to go straight past it. After the jobsworth / racist bus driver wouldn’t let us off at the lights (despite letting the Chinese jump on & off at will) we had a 10 minute walk back to the mall before we could begin exploring. The place is massive! So huge in fact (230,000m2 of shopping centre,  a super five-star hotel and 164,000m2 of  apartments, residences, and office buildings) that we ‘lost’ the supermarket and spent about an hour wandering round looking for the thing before realising it was in the basement (yes there were maps, but yes, they were in Chinese)

Ole proved to be a massive win. I know I’ve only been here a few months and the food is awesome but I was starting to get cheddar withdrawal and had already been hitting up family back home about sending some hot chocolate over. So when I found both of those (and Cadbury’s hot choc no less) alongside a multitude of comforts from home it was inevitable I was going to make a dent in that first wage packet! My final haul contained some lindt chocolate bars, fudge, 6 bottles of Somersby cider (subsequently drunk while watching the England v Argentina Autumn international) two tubs of hot chocolate, sweet chili sauce, Heinz BBQ sauce which I absolutely lost my shit over (I bloody love BBQ sauce) a block of extra-mature cheddar cheese and some sushi. That little haul set me back just over 400Y or around £40 so not a disaster in the circumstances. The sushi formed our lunch immediately after the supermarket expedition and was the start of the ‘obscure’ (in Rui’an) food bombardment I unleashed on my stomach over the next 48 hours (this also included some of the lindt chocolate, a delicious korma and poppadoms from the Taj Mahal restaurant, a really lacklustre McDonald’s, Johnny Walker, Ribena, onion bhaji, and a Starbucks bread pudding thing I’ve forgotten the name of)

As we both had so much stuff to lug about at that point it was back in a cab and after checking into the very nice (and very cheap) 4* hotel which set us back a mere 100Y (£10) each and dropping off our food myself & Leighton set off for a wander. We took a stroll up to the main river to take in the large island which forms the main (and only) part of any sort of tourism in Wenzhou. It’s a nice enough spot from what I can gather from distance, a big wheel so you can see the city from height and some parks but nothing which would merit making another trip especially unfortunately. After establishing on maps that we were over an hours walk from either the Taj Mahal or ‘on’ bar (recommended by some colleagues) it was back in a cab and off for the curry. The meal was delicious and true to form the cricket was on the tv so you know it’s a bona-fidey curry house 🙂 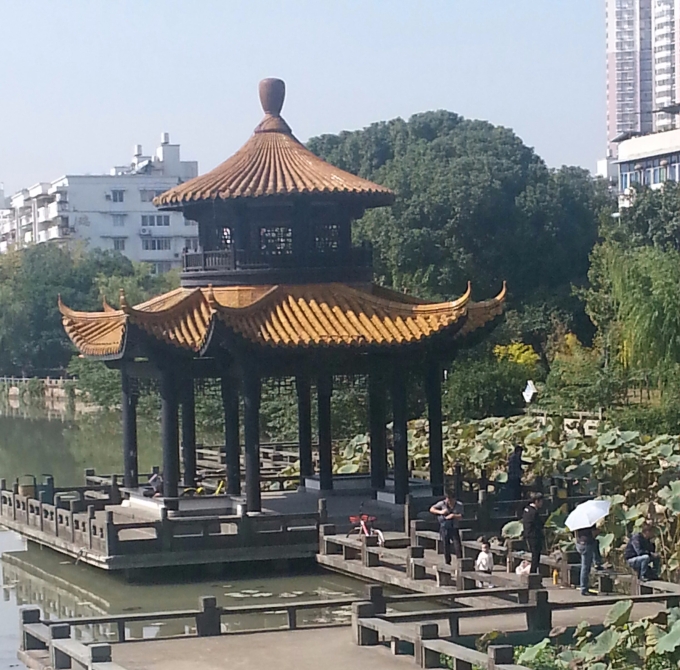 It was still pretty early at this point so we headed (in other cab) to on bar only to be hugely disappointed. The only draft they had, they didn’t have and corona was a whopping 35Y a bottle. We were about to head off after the first drink when the manager bought us both a drink each, redeeming the place slightly but not enough to merit spending any more money there. We’d spotted a much more populated tiki bar not far away so decided to head across that way which is where we met a very interesting couple of older ex-pats, one Spanish and one Portuguese. On hearing we were just visiting they insisted on taking us to the frankly bizarre ‘VIP club’ I’m not sure what I expected but it certainly wasn’t this – the place was

Everything about this place was designed to extort money from you. While you don’t have to pay to get in, you have to pay to sit at a table when there’s no-where else to sit and you have to pay through the nose for drinks. After a bit of dancing (I wasn’t playing for a table & there wasn’t anywhere else to sit cause the place was packed) we made our excuses and headed back to the hotel. No cab this time, it felt like a good idea to walk off some of the Johnny Walker. 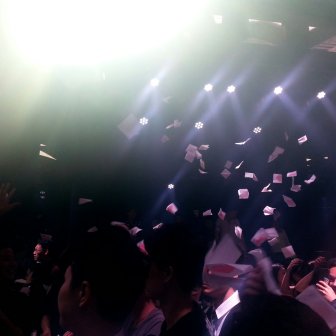 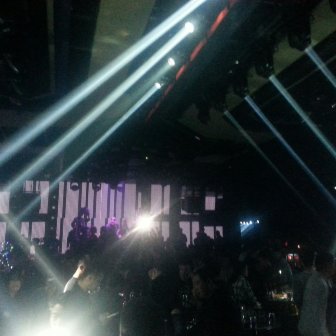 The next day bought trips firstly to the outlet mall and then the market. Time at this point was a little limited as the last bus back to Rui’an was at 6 and after clocking up 81 hours overtime in the last month I wasn’t about getting up early that morning! The outlet mall ended up being (for me anyway) the absolute jackpot! More specifically, one shop was the jackpot. Those of you in the UK will be familiar with Decathalon, the sports store. Turns out they make most of their products in China and so they have a huge place in the outlet mall. They also have stuff in that mall in LARGE EUROPEAN SIZES!! I hadn’t been that excited since the BBQ sauce the day before! After wandering round for a few minutes it was evident I was going to need a basket. I really can’t stress enough how happy I was with this, finding clothes anywhere in my size is a result but in China? And for a fraction of the usual cost? I was absolutely made up! My final haul consisted of two t-shirts, some shorts, a zip-up fleece, two pairs of walking trousers,  some toiletries (deodorants are really expensive out here as only the Westerners really use them) and a moisture-wicking training top. The damage? 500Y, or about £50. Result.

Sadly, the same could not be said about the market. having spent some time in Beijing Leighton was looking forward to some time browsing, haggling and scoring a pile of bargain clothes ready for the winter. It appears that Wenzhou men don’t shop that way though, Although the market was huge, spread over 4 floors almost matching the size of the malls we’d hit earlier, the men’s stalls were confined to the outside ground floor and they all sold the same things. And I don’t mean similar looking. I mean the exact same. Same design, same sizes, same patterns, even the same spelling mistakes on the badly translated ‘Chinglsih’ labels (Mike Air anyone?) Evidently men’s clothes aren’t designed to help represent the same level of self expression as they do back home.

Although the market was a bust, given I’d set off on this trip with little expectation of buying anything I was delighted with my collection and as an added bonus the weight of everything I’d bought helped keep my in the seat on the bouncy bus home. Win 🙂